Why We Love Unicorns

“Of all the legendary animals of art, folklore and literature, the Unicorn is the one with the greatest hold on our imaginations.” –– Nancy Hathaway, The Unicorn

Strong yet gentle, innocent yet wise, beautiful beyond imagination, unicorns have fascinated us since the dawn of time. Prehistoric artists painted them on cave walls 15,000 years ago. Alexander the Great claimed to have ridden one. England’s Queen Elizabeth I owned two of their horns, worth about $20 million in today’s money. What is it about these mysterious and magical creatures that continues to captivate people around the world, even after all these years? 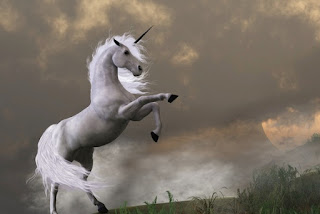 We’ve always admired unicorns’ power and majesty. These awe-inspiring creatures might lay their heads in the laps of young ladies and allow children to pat them, yet they retain their properties of strength, intelligence, intuition, and independence. No human can trap a unicorn unless the beast allows it to happen. Its wildness and freedom are part of what entices us; we may be just a bit envious of the unicorn’s ability to exist beyond the limitations of our humdrum, everyday world.

Unicorns represent peace and harmony and a compassionate way of living. They teach us that those who possess true power, self-confidence, and wisdom tread gently in the world and care for the innocent and vulnerable. If necessary, unicorns will defend themselves and their kind––but they never do so unless they’re attacked first.

Nor do unicorns stoop to lies, chicanery, or stupidity. Instead, they possess the traits of all great heroes: honesty, devotion, respect, inner strength, wisdom, and courage. They can’t be bought or manipulated. What’s more, they go about their business with genuine modesty, even though they know that they are the most exquisite creatures ever to set foot on Planet Earth.

In short, they give us hope. If we let them, they’ll guide us toward a more enlightened existence. What’s not to love?

The Genesis of the Unicorn

One creation tale, recounted in De Historia et Veritate Unicornis, says that the unicorn descended to earth on a cloud. The first-born creature, he was called Asallam. His role was that of the light-bearer and guide, the one who would drive away darkness from the face of the earth, for his horn itself was a beacon formed of spiraling light. With that laser-like horn he speared a rock and brought forth life-giving water to produce the most magnificent garden ever known.

Soon after, the Holy One breathed man into the garden. The unicorn was the first animal the man beheld. At first sight, the unicorn loved the man and knelt before him––and from that day forth, Fate has bound the two beings together for eternity.

Undoubtedly its most distinctive feature, the unicorn’s horn is also its most magical. The spiral shape symbolizes the spiraling pattern of life energy, what yogis refer to as the kundalini. Spiritually, the spiral signifies movement from the secret depths of your center outward into the world at large and back again. It also suggests the soul’s movement from earthly existence upward toward the higher levels of consciousness. We see the symbol echoed in Native American petroglyphs, Celtic art, and Zen gardens.

The unicorn can plunge his long spiraled horn into poisoned waters and cleanse them, so that all earth’s creatures can drink safely and be nourished. His purity is so profound that it affects whatever he touches––no taint or corruption or illness or evil can stand up to the unicorn’s righteousness. Like the Christ (with whom Christian mythology links the unicorn), the unicorn’s purity neutralizes the poisons that afflict the world.

During the medieval period in Europe, as the unicorn myth was gaining popularity among the aristocracy, so was poisoning as a way to rid oneself of one’s enemies. In reaction to the widespread intrigue and murderousness of the times, the unicorn’s horn became recognized as an antidote to evil. The royal classes––and anyone else who could afford to do so––purchased cups supposedly made of unicorn horn, which they believed would safeguard them against the omnipresent threat of poisoning. Most of the “unicorn” horns, however, were actually the spiral-shaped tusks of small Arctic whales known as narwhals.

The noted seventeenth-century English herbalist Nicholas Culpeper, in his Complete Herbal, recommended using unicorn horn in cordials to promote health and healing. As late as 1741, London’s apothecaries sold a powdered form of the horn to sprinkle in your drink for medicinal purposes. 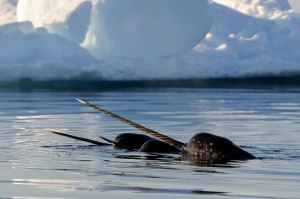 The Lady and the Unicorn

According to mythology, only a virgin can enchant the unicorn. Medieval troubadours, Renaissance painters, and modern-day novelists incorporated this theme into art and literature. Christianity even chose the unicorn as a symbol for Christ and the virgin as his mother, Mary.

Around the end of the eleventh century or so, the unicorn became linked with the concept of Amour courtois or courtly love. This highly structured, formalized code of behavior stated that a male suitor must worship and serve his lady––a woman who, by the way, was usually not his wife. At the time, marriages among the royalty and nobility were arranged for political reasons, and love rarely factored into these matches. Therefore, a man’s passion and erotic love were diverted to another source: a lady of the court whom he promised to honor, obey, and pledge himself. Such idealized romances, however, weren’t supposed to be consummated, as the church considered infidelity a mortal sin. Poets, musicians, and artists began linking the courtly lover with the unicorn and his lady with the virgin to whom the beast is drawn.

A series of tapestries known as “The Unicorn Tapestries” provide the most famous depictions of the myth. Believed to have been woven in Bruges, Belgium between 1495 and 1505, they now hang in the Cloisters of New York’s Metropolitan Museum of Art––a gift from John D. Rockefeller Jr. in 1937. Some sources suggest that the tapestries were originally commissioned to mark the wedding of Anne of Brittany to Louis XII, the king of France. The seven ornate panels––twelve feet wide and up to fourteen feet high––depict men hunting the unicorn, much as European aristocrats might have hunted deer in real life, and contain allegorical imagery from both pagan and Christian mythology. 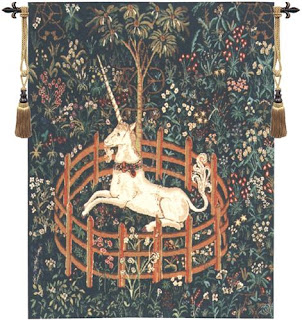 Today, however, the unicorn has been stripped of its wild, independent, and sometimes fierce nature. Its form has become cutsified, so that it looks like a darling little horse with big eyes and a colorful horn that couldn’t pierce butter. Its animalistic nature has disappeared, along with the lion’s tail and goatish beard it sported in earlier times. Although the unicorns of yesteryear were usually male, females seem to have cornered today’s toy market (even though folklore tells us female unicorns don’t have horns). In short, the unicorn has been tamed––not by legendary virgins, but by the likes of Hasbro and Disney.

The 1940 landmark animated film Fantasia gave us the model for modern-day unicorns. Disney’s adorable creatures frolic across the screen, decked out in bright yellow horns and coats of pink, blue, and lavender. The toy manufacturer Hasbro helped create a huge market for darling little unicorns via its My Little Pony series, plush toys, games, play stations, TV shows, and more.

Yet the mystical unicorn continues to be a most enchanting and beloved entity in the minds of young and old alike. We still love unicorns, and even though they no longer represent power and independence, we value their purity, beauty, and gentleness. Little girls who may know nothing of the old story of the virgin winning over the wild, freedom-loving beast are still drawn to the unicorn, perhaps because, as Nina Shen Rastogi proposed in an article for National Public Radio’s website, “I think for many young girls, there’s a fantasy that someday you will be recognized as the secretly beautiful, magical thing that you are. The unicorn will be attracted to something ineffable about you, secret from the rest of the world.” And as Terry Brooks points out in The Black Unicorn, “After all there has to be some belief in magic––however small––for any world to survive.”

Adapted from Skye Alexander’s book Unicorns: The Myths, Legends, & Lore. Skye is the author of more than 30 fiction and nonfiction books, many on metaphysical subjects. Visit her website www.skyealexander.com. 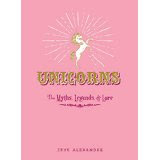 Posted by Skye Alexander at 1:08 PM