Psychic activity can occur when you are awake, asleep, or in between. Everyone experiences it differently. Some people have visions, some hear sounds or voices. Others feel distinct bodily sensations such as chills, twitches, or a tingling in the spine. Many just know something without understanding how they know it. 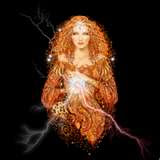 Psychic experiences fall into several categories. Clairvoyance (literally “clear seeing”) is the ability to see things beyond the range of ordinary physical perception, including events that have not happened yet. Psychic visions often come to us in dreams, but they can also appear in a shiny surface –– a crystal ball, pool of water, or the hood of a well-waxed automobile. Sometimes visions of nonphysical beings –– saints, angels, fairies, ghosts, elementals –– or even entire scenes emerge unbidden, seemingly out of nowhere, right before the eyes of the startled beholder.

Painter Marc Chagall was inspired to paint angels by a vision he had when he was a young man. Living in poverty and questioning his artistic calling, Chagall one night saw a huge, brilliant blue angel on the ceiling of his room. The angel, he believed, had come to give him the encouragement and confidence he needed to continue with his work.
Clairaudience means hearing things that don’t actually resonate with our ordinary auditory mechanism. This includes sounds too distant to be picked up by the physical ear, such as a mother hearing her child’s cries of distress from miles away. Hearing things that have no physical source also falls into this category.
Clairsentience or “clear sensing” is the term used for those inexplicable feelings we get when we know something without having seen, heard, smelled, tasted, or touched it. Sometimes clairsentience may be accompanied by a physical sensation, such as a tingling, prickling, burning, or chill, but the actual awareness arrives via a “sixth sense” instead of being received through one of our five physical senses.
Precognition or premonitions about the future, telepathy or mind reading, communicating with entities in other planes of existence (also known as mediumship or channeling), psychic healing, intuitive medical diagnosis, psychokinesis (moving physical objects with your mind), psychometry (picking up psychic vibrations from an object), near death experiences, and past-life recall all fall under the “psychic” heading.
These forms of enhanced awareness are often referred to as extrasensory perception or ESP. However, this implies that psychic ability is something “extra” when in truth it is as common as the senses of hearing, sight, and taste. 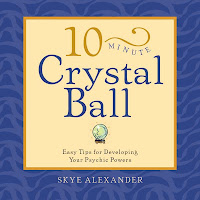 Posted by Skye Alexander at 9:25 AM No comments: