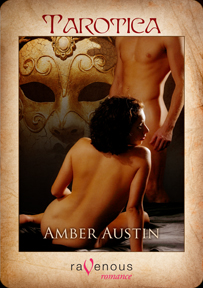 Miranda Malone watched a menagerie dressed in sequins, feathers, and black leather parade down San Francisco’s Market Street. The Castro’s carnival atmosphere was more outrageous and exciting than she could have imagined. When a young African man dressed like a gumball machine invited her to drop a dime into his codpiece, she laughed and caught the handful of rainbow-colored treats that spilled out. Miranda knew plenty of unusual characters back home in Salem, Massachusetts, but none compared to these. Even with the new purple streaks in her long dark hair she felt a bit ordinary.
She’d flown into California three days ago to begin a cross-country journey she’d been planning for seven years. Originally she’d intended to take the trip right after graduating from art school. But then her father was diagnosed with cancer and she’d stayed home to care for him. Now, with the money from his life insurance policy, she could finally follow her dream.
A tall man wearing only body paint and a boa constrictor passed Miranda and wagged both his snakes at her. She shrieked, then dissolved into giggles. Three trumpeters with gold lamé G-strings strolled by. A masked man in a jester suit abandoned the parade and approached Miranda. Throwing his arms around her as if they were long lost friends, he hissed in her ear, “Don’t scream.” Something hard jabbed into her ribs.
Before she had time to react the man was hustling her through the crowd. “Do you have a car?” he asked and poked her in the ribs again. This time she saw the gun.
She nodded.
“Take me to it. And no funny stuff.”
Fear and anger surged in her stomach as the reality of her situation sank in. Struggling to keep her emotions from clouding her thinking, Miranda tried to recall what you were supposed to do in a case like this. She couldn’t run––the streets were jammed with people––and if she yelled this crowd would probably mistake her plight for some kinky foreplay ritual. If they could even hear her over the hullabaloo. She reached for her cell phone, but the man noticed and snatched her purse away. In San Francisco, a man carrying a purse didn’t even attract a glance.
When they came to the spot where Miranda had parked her rented Kia, she considered kicking the car hard to set off the alarm. But nobody paid attention to car alarms anyway, and she didn’t want to provoke the man in the jester suit while his gun barrel was nuzzling her bra.
He rummaged through her oversized purse and found the keys. Maybe he just wants the car, she hoped. But her hopes dissolved when he unlocked the passenger side door and shoved her in.
“Climb over,” he ordered. “You’re driving.”
She crawled over the console, banging her knee on the gearshift. Keeping the pistol trained on her, the man got in beside her and fit the key into the ignition.
“Where are we going?”
“Just head for the Golden Gate Bridge.” He waved the gun at her. “Move it.”
Slowly she slid the car into the stream of traffic. As she navigated San Francisco’s famous hills, her mind scrambled for an escape plan. Suddenly she recalled one of those “Read this, it could save your life!” e-mails she’d received. Biding her time she began scouting about for something big and solid she could ram the Kia into, launching the air bags and bringing police to the scene of the accident. Soon she spotted a concrete bridge abutment, aimed for it, and sped up.
Posted by Skye Alexander at 7:40 PM No comments: