I'd like to let you know about my new Aromatherapy Card Deck, published by Fair Winds Press. This is the third in my series of holistic healing decks, and it's beautifully produced. The boxed set contains fifty full-color cards that describe various therapeutic uses for aromatic plants, along with striking images of each plant.

For thousands of years fragrant oils, gums, and resins have been used for both medicinal and cosmetic purposes. Ancient Chinese and Indian texts describe the therapeutic, philosophical, and spiritual properties of aromatics. The Egyptians employed them in all areas of life, from seduction to embalming. The Bible discusses special oils for anointing and healing; aromatics were so highly prized that the "wise men" gave them to Jesus at his birth.
French chemist and perfumer René-Maurice Gattefosse coined the term "aromatherapy" in 1928 when he discovered, quite by accident, that lavender oil helped heal a burn on his hand and prevented scarring.
Essential oils are extracted, usually by distillation, from the flowers, leaves, bark, or roots of aromatic plants. Some essential oils can be rubbed directly on the skin to provide therapeutic benefits. Others may be ingested. When inhaled, scents affect the limbic system of the brain, causing shifts in brain wave function that can trigger emotional and/or physical reactions. Here are some popular ways to use aromatic oils:
Only pure essential oils offer therapeutic properties––synthetic concoctions lack the plants’ natural vital energy. Some essential oils should not be ingested and some can be irritating to the skin––don’t them full-strength. Citrus oils can cause sensitivity to sunlight. Pregnant women, children, and the elderly, in particular, should exercise caution when using essential oils. Because essential oils are highly volatile, store them in dark, glass bottles in a cool place. Aromatherapy should be considered a complementary therapy, not a substitute for professional medical care.

Posted by Skye Alexander at 9:22 AM 2 comments: 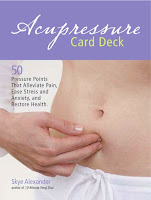 I'd like to introduce my new full-color illustrated Acupressure Card Deck, which I hope you'll find interesting and helpful--it's now available from Fair Winds Press. One of the world’s oldest healing modalities, acupressure has been used in Asia for thousands of years to relieve a wide range of common ailments. Chinese medical texts dating back to 300 B.C.E. describe the practice of acupressure. Although virtually unknown in the West until the middle of the 20th century, acupressure is becoming increasingly popular as a self-help and first aid treatment that supports the body’s natural healing ability.

Acupressure, it’s sometimes said, is acupuncture without the needles. This gentle and effective form of therapeutic touch follows the same general principles as acupuncture, but it’s less invasive. Instead of inserting needles into certain points on the body, you apply pressure with the thumbs and fingertips to stimulate the flow of life energy––or Qi, as it’s called in China––to the affected area(s).

According to Chinese medicine, disease results from imbalances in the body’s Qi. Acupressure facilitates the smooth, harmonious flow of Qi through a system of invisible channels known as meridians that run through the body. Hundreds of acupressure points lie along these meridians, like stations along a train route. Usually they are designated by the meridian name (abbreviated) plus a number to indicate their positions. They’re also called by colorful names, such as Sea of Tranquility or Three Yin Crossing, that describe their benefits or locations.

Acupressure is safe, easy, and virtually painless. You can use it to treat yourself or someone else, for all sorts of common problems––psychological as well as physical. Indeed, holistic healers generally believe that most physical ailments are linked with psychological issues. Therefore, it’s no surprise that a single acupressure point might benefit various disorders. “Heavenly Pillar” (B 10), for example, eases stress and helps heal acne––two conditions that often are connected.

Pressing a point can relieve discomfort locally––that is, at the place where the point exists––and/or in another part of the body that may be quite some distance from the point’s actual position. That’s because activating a particular point affects the flow of Qi through a meridian, generating healing along the way. For best results, you may want to stimulate several points together, as the cards in this deck suggest. Pressing both “Big Mound” and “Outer Gate,” for instance, can ease tendonitis in the wrist and arm.

Use your fingertips or thumbs––or both––to apply steady, gentle pressure to a specific point. Don’t tap or pump a point. Don’t grip it so hard you cause pain. If you wish, make small circles with your finger on the point. In most cases, you should hold a point for at least 30 seconds to a minute or more at a time. It may be necessary to activate a particular point several times a day to produce continued results.

I hope you'll check out my other colorful healing card decks, too: The Reflexology Card Deck and The Aromatherapy Card Deck.

Posted by Skye Alexander at 7:26 AM No comments: