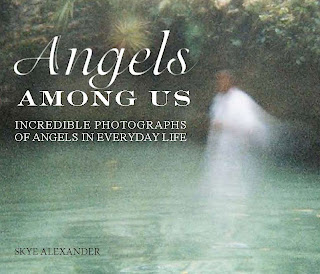 Here's another excerpt from one of my recent books. It's a full-color, hardback book, rich with wonderful photographs of angels taken by real people who've had personal contacts with these divine beings. Available in the US through Amazon.com, and through bookstores in the UK.

We seem to have an innate need to believe in benevolent beings and a mystical realm beyond what we experience in our everyday lives here on earth. For thousands of years, people around the globe, from myriad cultures and belief systems, have sought and received assistance from heavenly helpers. Today, when so much of our world seems baffling, overwhelming, or totally out of control, perhaps it’s no coincidence that angels seem to be showing up in large numbers to guide us on life’s perilous journey.

In 2008, the Washington Post conducted a poll of 36,000 adults from various religious and nonreligious backgrounds. It found that most Americans think angels actively participate in our lives, and more than 80 percent believe miracles occur.

Many people say they experience the presence of angels during life-threatening situations or periods of hopelessness and despair. Russian artist Marc Chagall, for example, was shaken by self-doubt and ready to give up his profession when one bleak night a rustling of wings woke him from a sound sleep. A brilliant blue light illuminated his bedroom and a beautiful winged creature hovered above him. Chagall believed the angel had appeared to inspire and encourage him. For the rest of his life he continued to paint angels, which he considered manifestations of the highest form of love.

Angels frequently help us resolve earthly conundrums. Some of the world’s greatest geniuses, including Leonardo da Vinci and Albert Einstein, admitted receiving insight and guidance from higher sources. Often these insights come to us in the form of epiphanies––“aha” moments––as if the sun suddenly emerged from behind a cloud and chased away the shadows in our minds. Other times awarenesses present themselves in dreams, meaningful events and “coincidences,” or through people who seem to have been sent to us at just the right moment, precisely for that purpose.

Medical personnel and Hospice workers often witness beings of light nearby when someone dies. It’s as if celestial tour guides show up, ready to shepherd the newly released soul into the wondrous world on the other side. People who have had near-death experiences regularly recount tales of being warmly greeted by luminous entities who resonate with love, peace, and joy.

After Jay Bailey of Kerrville, Texas died in an automobile accident, he found himself in a place permeated by radiant light. He recognized his mother and father standing nearby, as well as a powerful being dressed in a translucent ivory-colored suit that glowed, whom he refers to as the Brilliant One. Bailey felt safe, secure, and completely accepted. As he describes it, “The atmosphere is love; we feel such joy in togetherness.” The Brilliant One gave Bailey a choice: to stay in this other realm or return to earth. When he chose to return, he says, “I saw the Brilliant One pick me up and proceed into my body, head first. Liquid life-fluid flows into my body.” He awoke in the hospital after lying comatose for two weeks.

In his book The Evolution Angel, Todd Michael, O.D., an emergency and trauma physician who witnessed more than five hundred deaths, explains there really aren’t any angels, per se. What we interpret as angels are emanations of an omnipresent, loving, divine energy that pervades our universe. “The ‘angels,’ the ‘messengers,’ are just [God’s] way of showing himself in such a way that we can actually handle it.”


In this book, you’ll read stories from people of all ages, nationalities, and walks of life who reveal their stories of encounters with angels. Many of them believe that during their darkest hours angels visited them to provide protection, bring messages of hope, or offer miraculous healing. Some of their experiences are very personal; others are shared by large numbers of people. But these stories are more than mere recollections––they are accompanied by photos of the angels themselves.
Posted by Skye Alexander at 1:55 PM No comments: 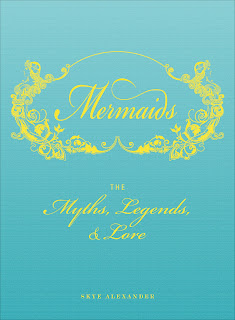 Here's an excerpt from my new book Mermaids: The Myths, Legends, and Lore. It's a beautifully illustrated collection of stories, sightings, and oddities about mermaids throughout history and from around the world. Enjoy!

Mysterious, magical, and mesmerizingly beautiful, mermaids have enchanted humanity for thousands of years. No matter where you go on Planet Earth, you’ll hear stories of these elusive and evocative sea creatures who are sometimes benevolent, sometimes destructive, but always alluring. They swim in the seven seas; splash about in rivers, lakes, and streams; and even frolic in fountains and wells.

Some researchers theorize that we’re drawn to the dichotomy of light and dark that mermaids embody. These lovely ladies are simultaneously desirable and dangerous. They can bring good luck or disaster. Seafarers have long swapped stories about mermaids charming sailors with their heavenly singing, then smashing their ships and drowning the hapless seamen. Mermaid myths usually depict these sensuous sirens with a dual nature—they can be benevolent or malevolent, depending on what mood they’re in at any given time. Like women, it’s a mermaid’s prerogative to change her mind—and when she does, watch out!
Posted by Skye Alexander at 8:28 AM 2 comments: