The Best Thing You Can Do for Yourself––and It's Free 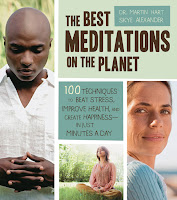 One of the best things you can do for yourself every day is meditate. In The Best Meditations on the Planet, my coauthor Dr. Martin Hart and I present 100 meditations anyone can do to improve mental and physical well-being. The following excerpt explains just some of the scientifically researched benefits you can get from meditation. Our beautiful, full-color book features lots of photographs and step-by-step techniques. It's available from Amazon and bookstores, or you can order it from my website's book section.

What Can Meditation Do for You?

Meditation only takes a short period of time each day, costs absolutely nothing, requires no special equipment or accoutrements, and can be done successfully by anyone, anywhere, anytime. Meditation could be the single most valuable tool we have available to heal ourselves and our planet.

During the last two decades, hundreds of scientific studies have been conducted at more than 250 universities and research facilities internationally to examine meditation’s efficacy. Although devotees of the practice may assert that meditation can do everything from create world peace to make you a better lover, clinical research clearly shows that meditation’s benefits are substantial and far-reaching. Here are just some of the amazing results top scientific and medical researchers have linked to meditation:

When you meditate, you stop thinking about work, relationships, finances, and daily chores, and become present in the moment. Mental chatter ceases temporarily and you experience a state of relaxation in both mind and body.

The changes you experience can actually be measured physically. During meditation, your heart rate and respiration slow. Brainwave frequencies decrease from the usual 13–30 cycles per second (the beta level of consciousness) to 8–13 cps (the alpha level). Brainwave activity also shifts from the right frontal cortex to the left. Richard J. Davidson, Ph.D., a researcher and neuroscientist at the University of Wisconsin, has been studying meditation’s effects for more than two decades. When he examined the brains of Buddhist monks to see how meditation affected their neural physiology, he discovered the left frontal cortex (the part of the brain linked to happiness) was more active in the monks than in people who didn’t meditate.

During meditation, the brain also steps up production of endorphins, the proteins that enhance positive feelings. According to a recent clinical trial of 97,000 subjects conducted by the Women's Health Initiative, positive, optimistic people enjoy longer, healthier lives than their negative, pessimistic peers.

Using modern brain-scanning technology, researchers have discovered that meditation produces long-term physiological changes as well. A UCLA study, led by neuroscientist Eileen Luders, Ph.D., demonstrated that meditation actually increases the size of the brain. The study’s results, released in 2009, showed the areas of the brain associated with attention, focus, and positive emotions were larger in people who meditate regularly than in non-meditators. Meditation causes changes in cell metabolism, too, according to another study performed at the Benson-Henry Institute for Mind/Body Medicine at Massachusetts General Hospital and reported in Medical News Today in 2008. The changes, explained Dr. Jeffery Dusek, co-lead author of the study, were the opposite of those induced by post-traumatic stress disorder.

These and other clinical studies reveal that meditation strengthens the part of the brain linked with positive emotions while counteracting the destructive impact of stress and anxiety. Indeed, stress reduction may be the key to meditation’s beneficial effects on health. At least 60 percent of all doctor visits are due to stress-related problems. “It’s hard to think of an illness in which stress and mood don’t figure,” points out Charles L. Raison, M.D., clinical director of the Mind-Body Program at Emory University School of Medicine in Atlanta.

The brainwave changes induced by meditation also boost stem cell production, enhancing the body’s ability to regenerate and repair itself. Leading stem cell researcher Doris Taylor, Ph.D., Director of the Center for Cardiovascular Repair at the University of Minnesota, measured the blood of Matthieu Ricard, French philosopher and author of the book Happiness, before and after meditation. The result after only fifteen minutes of meditation “was a huge increase in the number of positive stem cells in [his] blood.”

But you needn’t be a Buddhist monk or a “meditation marathoner” to reap the rewards of meditation. Both Richard Davidson and Sara Lazar, Ph.D., a neuroscientist at Beth Israel Deaconess Medical Center, have studied meditation’s effects on ordinary, middle-class Americans. "What we found out,” says Davidson, “is that after a short time meditating, meditation had profound effects not just on how they felt but on their brains and bodies."


For twenty-first-century Westerners struggling to cope with ever-increasing stress in their professional and personal lives, turning to this ancient Eastern practice may be the answer to enjoying happier, healthier, longer lives.
Posted by Skye Alexander at 10:27 AM 2 comments: