What’s sexy about a fishtail? The mermaid’s tail is one of her most obvious and intriguing symbols, one that’s rich with implications. In The Republic of Love, Carol Shields describes it as “a sealed vessel enclosing either sexual temptation or sexual virtue, or some paradoxical and potent mixture of the two.” In fact, part of the mermaid’s appeal may be her sexual unattainability—we always want what we can’t have. She’s the ultimate tease––a gorgeous babe with the breasts of a Playboy bunny, the face of an angel, and the long, flowing hair of a supermodel. But no man can consummate a relationship with her because her tail prevents access to her “lady parts.”
However, the mermaid’s tail didn’t always look the way it does now. She wasn’t always so constrained. Medieval depictions of mermaids often showed them with two tails or a tail split down the middle, suggesting that these aquatic beauties could take on human lovers after all. Dating back to ancient times, dual-tailed mermaids turn up in the art and mythology of many countries, and recall the old matriarchal belief systems that predated the patriarchal religions of today. 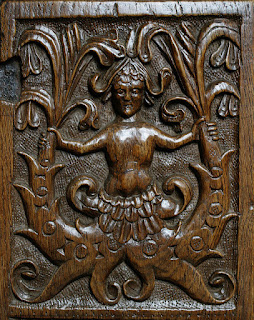 The split-tailed siren is a cross between the early Celtic fertility goddess Sheila-na-gig, who squats and suggestively shows off her feminine secrets, and the more typical mermaid. This sexy seductress blatantly separates her fishtail into two parts, revealing her genitalia as a symbol of feminine power and creativity.

Starbucks’ Twin-Tailed Temptress
Back in 1971, when Starbucks started selling coffee beans in Seattle, Washington, the company chose a mermaid for its logo. That half-naked beauty was of the two-tailed variety and she provocatively parted her tails, holding them up on either side of her bare torso, enticing customers with her charms.

Over time, Starbucks modified the mermaid to make her less naughty. In 1987, logo designers covered up her breasts with her long, wavy hair. When Starbucks became a publicly traded company in 1992, the logo underwent yet another change, this time obscuring the mermaid’s lower body so that only a hint of her split-tail remained in the stylized, sanitized version. To commemorate its fortieth anniversary in 2011, Starbucks refined the logo once again, eliminating the familiar lifesaver-like circle around the mermaid.

Sexy Spiritual Sirens
Despite her blatant sexuality, the two-tailed seductress decorates medieval churches and cathedrals throughout Europe, the British Isles, and Ireland. Often rendered in wood, stone, or mosaic, she graces the French churches Notre Dame de Cunault, the Basilique St. Julien de Brioude, St. Pierre de la Bouisse, and St. Pierre Bessuéjouls. She also turns up in Italian churches, including San Pietro in Ciel d’Oro, Pavia, Santa Croce in Parma, and Cattedrale di Santa Maria Annunciata in Puglia. England, too, has twin-tailed mermaids in the Church of St. George in Hertfordshire and Lancashire’s Cartmel Priory Church.
Mermaids of the usual, single-tailed variety also appear in plenty of churches in Europe and the British Isles. In times when most of the populace was illiterate, pictures conveyed themes and taught morals to the pious. Christianity connected fish with Jesus, the “fisher of men,” and with Christians in general. Mermaids symbolized the sins of vanity and lust. When churchgoers saw mermaids swimming with schools of fish on the walls of their chapels, they recognized it as a message to avoid temptation that would lead them to fall into the treacherous mermaid’s clutches.
Of course, the church fathers played up stories of the mermaid’s penchant for bashing sailors’ ships onto rocks during storms, drowning men who succumbed to her wiles. Nevertheless, these sexy sirens served as artful adornments that may have distracted or delighted many a bored parishioner over the centuries. 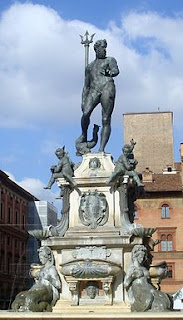 One of the most intriguing examples of double-tailed mermaid sculpture dominates the Piazza Nettuno in Bologna, Italy. This erotic fountain features mermaids suggestively spreading their tails while enticingly squeezing water from the nipples of their shapely breasts. Commissioned to celebrate Pope Pius IV’s election in 1559 and sculpted by artist Giambologna, the bronze Fontana di Nettuno—which also depicts Neptune in all his naked glory—raised a good deal of controversy when it was unveiled. But the Pope gave the fountain his blessing, saying, “For Bologna it is alright.”
Nothing stays the same forever, and that goes for the mermaid’s image as well. Today’s mermaids are fun-loving and friendly––lighthearted playmates who delight little girls instead of driving men mad with desire. The blatantly bawdy and awe-inspiring sirens of the past have been ousted. In the process, the split-tailed seductress has vanished, her connection with the powerful, early fertility goddesses erased by cocooning her lower body in a chaste, single tail. 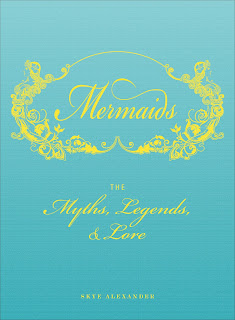 Adapted from my book Mermaids: The Myths, Legends, & Lore.

Dear Skye Alexander, I'm Mohammed Fazlullah s/o Md.Abdul Huq. I'm Writing from Secunderabad India. I recently bought your book. Some of the ingredients such as black candles are not easily accesible here. I bought the book to ease problems related to health wealth and relationships.So far I found it Intersting. 10 Minute ___ S----ls. I some how felt that the existing Indian Gods are some other energy was or may be blocking however I hope all will be smooth soon.

Thank you for buying and reading my book. I hope it helps and that your situation improves. You can substitute other ingredients if you can't find the ones recommended in the book. The most important thing is your thinking. Positive thinking brings better results. Good luck to you

Thank You Skye, I recently did The nine crystals wishes here in india, I hope that two three crystals were smaller in size but still I hope to get my Wishes because they are legit. I'm hoping that these simple rituals won't be a hindrance to any religions here in India. Thanks for your Reply. Have a Nice day !!

Thanks for getting in touch. Remember, the most important thing in working with the nine crystals is your intention and clarity--doubt diminishes the power of your efforts. This shouldn't interfere with any religious practice. Hope all is well. Best to you.

Hey, I loved your Mermaids book. I've been doing a bunch of research on worldly merpeople this past month in preparation for MerMay (an annual event on such social media as Instagram for artists to post drawings of mermaid throughout the month of May) because I'd like to do sketches of all the different "races" of mermaids from folk legends around the world. I'm finding names of particular mermaids and mermen from Inca mythology, but no name for them as creatures other than "sirenas" obviously taken from Spanish influence. If I recall, your Mermaids book was a little scarce on South American mermaid folklore, so I was wondering if you had anything to add to that. Any words that would be of particular use to me in a google search :)
Thanks