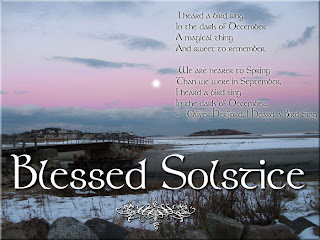 The Winter Solstice marks the sun ingress into the first degree of the zodiac sign Capricorn, the shortest day of the year in the Northern Hemisphere. This year the Winter Solstice occurs on December 21 (although it can vary a day or so from year to year).
In pre-Christian Europe, Britain, and Ireland the Winter Solstice celebrated the birth of the Sun God. This holiday of good cheer and festivities, also known as Yule, commemorates life over death and the return of the sun. The turning point in the year, it heralds increasing sunlight as the days grow steadily longer for six months. The holiday was so important to Pagan cultures that Christianity adopted this joyful season to celebrate the birth of Jesus. Like the Sun God, Jesus is said to bring light into the world during the darkest time of the year.
A Pagan custom was to build a fire from wood of the nine sacred trees (some people say seven) as part of the Winter Solstice ritual. An oak log, known as a Yule log, served as the fire’s centerpiece and represented the ascendancy of the Oak King, who would rule until the Summer Solstice. (A small piece of the Yule log was saved for next year’s fire.)
After the fire burned down, anyone who wished took ashes from the ritual fire and wrapped them in a piece of cloth, along with a pine cone. Then they placed their packages under their bed pillows to solicit nightly guidance and angelic advice about the coming year.
Posted by Skye Alexander at 1:52 PM

Hey, I remember that Solstice image! Solstice on Good Harbor Beach, what could be better?

As I recall, you created that image, combining the poem and the photo of Good Harbor Beach, right? Thanks Kathleen!